News From the Libraries: October 2022

A Bit of Hocus Pocus - Books Bound in Human Skin

A Bit of Hocus Pocus - Books Bound in Human Skin 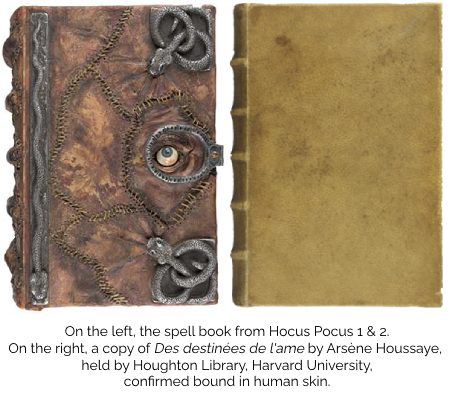 It's the month of spooks and spirits. The strange and the macabre. You may have seen Disney's recent release, Hocus Pocus 2, or are a fan of the original film from 1993. The vengeful, vivacious, villainous witch Winifred Sanderson has a book that contains all her most dangerous spells. A magical book that is itself alive. And famously bound in human skin.

But did you know binding books in human skin isn't just hocus pocus?

Though rare and plagued by rumor and many false claims, this unusual practice has been documented at least as far back as the early 1700s, though most volumes that currently exist are from the 19th century.

Many of these were created or commissioned by doctors who had access to cadavers for dissection. It was a time of great growth in medicine, specifically in anatomy and surgery, and ethics were sometimes pushed aside in the pursuit of knowledge. The academic demand for bodies created a lucrative underground trade that spawned at least one murderous duo looking to make a profit from this grim business boom.

Skin for such bindings often came unwillingly from executed criminals or the destitute who died in charity hospitals and almshouses, though a few cases exist where an author requested a copy of their own book be bound in their skin after death. Far from books of spells, existing examples include French literature, anatomical and gynecological works, and books of poetry.

These days science, not magic, helps identify and preserve these unique books. Advanced techniques like peptide mass fingerprinting are being used to identify bookbinding materials in situations where DNA may have degraded or been destroyed. This process is being used to confirm or, in many cases, debunk lingering tales that surround old books in museum collections and historical libraries. Despite this, these rare relics continue to intrigue individuals and Hollywood alike.

If you'd like to learn more, the library will be hosting Megan Rosenbloom, author of "Dark Archives: A Librarian's Investigation into the Science and History of Books Bound in Human Skin" for a special virtual event on November 2nd at 6:00 pm CT. Register here: https://uthealthsa.zoom.us/webinar/register/WN_6z89tt__QUeoWcO9U5IkZA

For more information see the History of Medicine Fall Lecture Series post below!

This post is brought to you by the P.I. Nixon Medical Historical Library, located on the 5th floor of the Briscoe Library. Reach out for more information or a tour of the library.

Join The Clay Collective artists to create a form from clay and learn about the process as it becomes a ceramic piece of art. Students can stop by to get a treat bag and their own ball of clay! Make something with your clay while learning more from the artists of The Clay Collective. 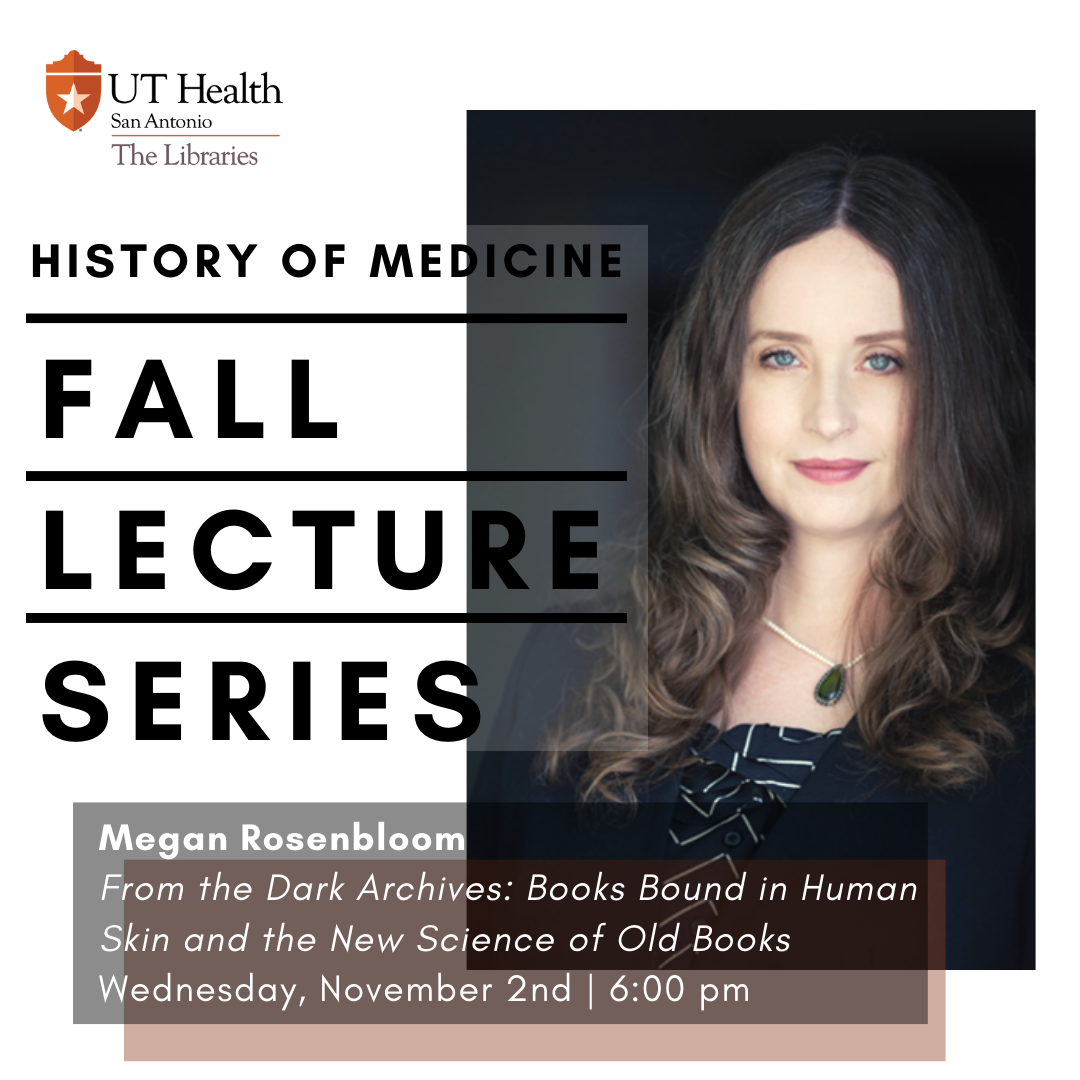 Megan Rosenbloom presents From the Dark Archives: Books Bound in Human Skin and the New Science of Old Books

The macabre practice of binding books in human skin sounds like the stuff of horror movies but was actually perpetrated by well-respected doctors in the 19th century, a practice now known as anthropodermic bibliopegy. Would you know a human skin book if you held one in your hand? Join librarian and author Megan Rosenbloom as she discusses her debut bestselling book, Dark Archives: A Librarian’s Investigation in the Science and History of Books Bound in Human Skin, and how her interdisciplinary scientific team’s work to prove and disprove claims of anthropodermic books fits into the emerging field of biocodicology – where researchers apply proteomic, genomic, and microgenomic methods to old books to reveal heretofore unimaginable truths hidden in their pages and bindings. Learn what this practice tells us about a little-known dark chapter in American and European medical history. 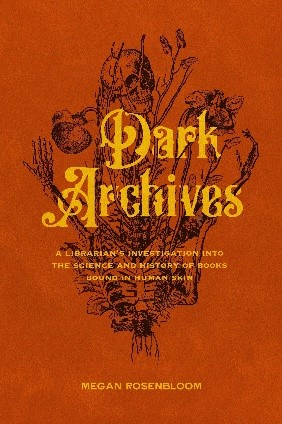 Megan Rosenbloom is Collection Strategies Librarian at UCLA Library in Los Angeles. Megan served as a medical librarian for many years, where she developed a keen interest in the history of medicine and rare books. She is President of the Southern California Society for the History of Medicine and serves on the history of medicine advisory board for The Huntington. She leads a research team called The Anthropodermic Book Project that aims to find the historic and scientific truths behind the world’s alleged books bound in human skin, or anthropodermic bibliopegy, and her bestselling debut book about this practice, titled Dark Archives: A Librarian’s Investigation into the Science and History of Books Bound in Human Skin, was a New York Times Editors Choice and won the 2021 Best Monograph Award from the Librarians, Archivists, and Museum Professionals in the History of the Health Sciences (LAMPHHS). Come one, come all to watch or play!

Mahjong (mah-jongg) is a Chinese game played, usually by four people, with 136 or 144 rectangular pieces called tiles. The object is to collect winning sets of these tiles, as in card games such as gin rummy.

Mah-jongg, a game in which players match or sequence sets of tiles, is often referred to as China’s “national pastime.” However, its rise as a globally beloved game has roots somewhere else: in the emergence of modern American culture in the 1920s. Remember! There are many different variants of Mahjong! Our demonstration game will be based on the American style of play.

There are around forty known mah-jongg variants - and more than a dozen Chinese variants! Those other variants are not harder to learn than American mah-jongg. American is the hardest to learn of them all.

October is National Medical Librarians Month (NMLM).  Health information professionals play an important role within medical and research institutions. The UT Health San Antonio Library has a wonderful team of librarians and staff that are committed to assisting you and supporting the research, clinical, and educational goals of the institution. The NMLM theme for this year is Make better decisions faster: Consult your health information professional. Collaborate with your medical librarian to find credible health information quickly and efficiently, there are no better partners than medical librarians!

Our staff is available to help you find reliable health information quickly and efficiently. Visit our library homepage and acquaint yourself with our resources and services. If you need more assistance, please reach out to your school's library liaison or use our AskALibrarian chat feature.

Did you know the library offers access to more than just healthcare databases? Through Texshare, a partnership of libraries across Texas, we've just added 16 new resources for you that range from business, ebook collections, newspapers, and genealogy.

Check out what we have to offer in our comprehensive A-Z list. You might be surprised what you find.