Olive Read met Pat I. Nixon while they were both attending the University of Texas at Austin. He graduated in 1905, but they waited until he finished his M.D. degree at John Hopkins University School of Medicine and established his practice in San Antonio before marrying in 1912. They had four boys – Pat Ireland Nixon Jr., Robert Nixon, and the twins Benjamin Nixon and Thomas Nixon. Olive shared Nixon’s interest in history and was his partner in collecting historical materials.

Dr. Pat I Nixon, Jr. MD was born on May 28, 1913. He graduated from the University of Texas at Austin in 1935 and Duke Medical School in 1939. He joined the Army in 1949 and was stationed at West Point during World War II as a Hygiene Teacher and a member of the Medical Staff. He returned to San Antonio in 1946 and practiced medicine with his father. He married Ruby Baker while in the Army, and they had 4 children. Ruby died in 1982, and he married his second wife, Della. He loved old antique cars and driving and donated much of his time to charity and doing work for the Boy Scouts. He died in October 2012 at the age of 99.

Frances Amanda Andrews was born in Randolph county, North Carolina, on Nov. 5, 1843. In 1866 she left North Carolina with her brother-in-law and sister and after a 3 months journal arrived in Texas, settling at Belmont. She taught school for a few years then in 1872 married Captain Robert Thomas Nixon, the owner of a 14,000 acre plantation 6 miles south of what is now Luling. Captain Nixon had 9 children from his previous marriage. Fannie added 7 children of her own. In 1895 they moved to Luling. When her husband died in 1897, she managed the estate for the next forty-two years. 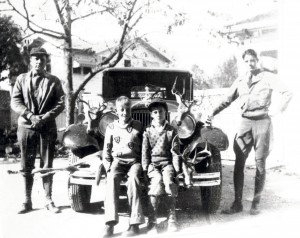 Ben Oliver Nixon was born in 1921, the oldest of the “Tennis Playing Twins.” He was a Captain and aircraft pilot in the Air Force and died while flying a plane in 1961. He was married to Grace Nixon and had four children.