About the Hurricane Beulah Collection

A large portion of the Ramirez collection documents the aftermath of Hurricane Beulah which made landfall near the mouth of the Rio Grande River as a Category 3 hurricane on September 20, 1967. Beulah caused extensive damage across South Texas and neighboring communities across the U.S. - Mexico border. On the evening of September 21, approximately 14,000 refugees from Camargo, Tamaulipas crossed the border and entered Roma and Rio Grande City seeking food, shelter, and medical care. It is documented that in under nine hours, the population of these communities more than doubled.

For several weeks, Dr. Ramirez worked with volunteers from the local community, UT Medical Branch in Galveston, Santa Rosa Hospital in San Antonio and the U.S. Army in the medical response to this crisis. It was during this time that Dr. Ramirez had the opportunity to lead President Lyndon Baines Johnson, and Governor John Connally on a tour of the area stricken by the hurricane, bringing national attention to this natural disaster. For his leadership and rise to action, Dr. Ramirez was cited by the Surgeon General William H. Stewart in 1967.

Dr. Ramirez kept an extensive journal of his experiences leading the health care response to Hurricane Beulah in Starr County. Over 135 photographs and 185 pages of letters, newspaper clippings, and journal entries document the efforts of the medical team, the state and federal response, and the overall aftermath of this natural disaster.

Photographs document how emergency clinics were organized and managed and portray the use of make-shift equipment in the absence of standard medical supplies. In addition, text-based portions of this collection document how disaster planning and recovery procedures in Texas changed after Hurricane Beulah due to information provided by Dr. Ramirez and the medical response team in Starr County to agencies such as the  Texas State Department of Health and the Texas Department of Public Safety. Due to growing national attention toward emergency preparedness and disaster response, the portion of the collection devoted to Hurricane Beulah disaster response is of significant historical and informational value. 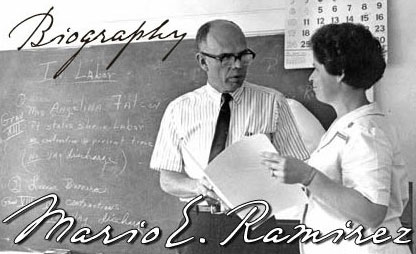 Learn more about the life and work of Dr. Mario E. Ramirez