What is "the best available evidence"? The hierarchy of evidence is a core principal of Evidence-Based Practice (EBP) and attempts to address this question.

Prefer a video? Watch this tutorial What is the Hierarchy of evidence for medical research?

Case control studies are studies in which patients who already have a specific condition are compared with people who do not have the condition. The researcher looks back to identify factors or exposures that might be associated with the illness. They often rely on medical records and patient recall for data collection. These types of studies are often less reliable than randomized controlled trials and cohort studies because showing a statistical relationship does not mean than one factor necessarily caused the other.

Follows the same direction of inquiry as a cohort study. Subjects begin with the presence or absence of an exposure or risk factor and are followed until the outcome of interest is observed. However, this study design uses information that has been collected in the past and kept in files or databases. Patients are identified for exposure or non-exposures and the data is followed forward to an effect or outcome of interest.

Carefully planned experiments that introduce a treatment or exposure to study its effect on real patients. They include methodologies that reduce the potential for bias (randomization and blinding) and that allow for comparison between intervention groups and control (no intervention) groups. A randomized controlled trial is a planned experiment and can provide sound evidence of cause and effect.

A standardized, one-page summary of research evidence organized around a clinical question. CATs provide both a critique of the research and a statement of the clinical relevance of the results.

Focus on a clinical topic and answer a specific question. An extensive literature search is conducted to identify studies with sound methodology. The studies are reviewed, assessed for quality, and the results summarized according to the predetermined criteria of the review question.

Thoroughly examines a number of valid studies on a topic and mathematically combine the results using accepted statistical methodology to report the results as if it were one large study.

Describe the relationship between diseases and other factors at one point in time in a defined population. Cross-sectional studies lack any information on the timing of exposure and outcome relationships and include only prevalent cases. They are often used for comparing diagnostic tests. Studies that show the efficacy of a diagnostic test are also called prospective, blind comparison to a gold standard study. This is a controlled trial that looks at patients with varying degrees of an illness and administers both diagnostic tests — the test under investigation and the “gold standard” test — to all of the patients in the study group. The sensitivity and specificity of the new test are compared to that of the gold standard to determine potential usefulness.

Uses words to describe human behaviors. It answers a wide variety of questions related to human responses to actual or potential health problems. The purpose of qualitative research is to describe, explore and explain the health-related phenomena being studied.

Uses numbers to obtain precise measurements that can later be statistically analyzed.  Many quantitative studies test hypotheses.  It follows a systematic, subjective approach to examine the relationship between variables with the primary goal being to analyze and represent that relationship mathematically through statistical analysis.  This is the type of research approach most commonly used in scientific research problems.

Comparison of Qualitative and Quantitative Research

An approach to inquiry and research that combines quantitative and qualitative methods into one study in order to provide a broader perspective.  Mixed method researchers emphasize the research problem and use all approaches available in order to come to a better understanding.

Prefer a video? Watch this tutorial Qualitative and Quantitative Research 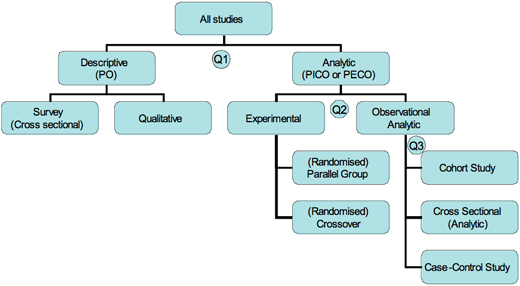